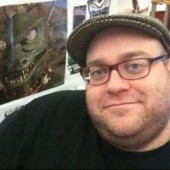 He is the host of ENGAGE: The Official Star Trek Podcast, a member of the New York Film Critics Circle and challenges you to a game of backgammon.